The Subject is ‘Dreaming’ 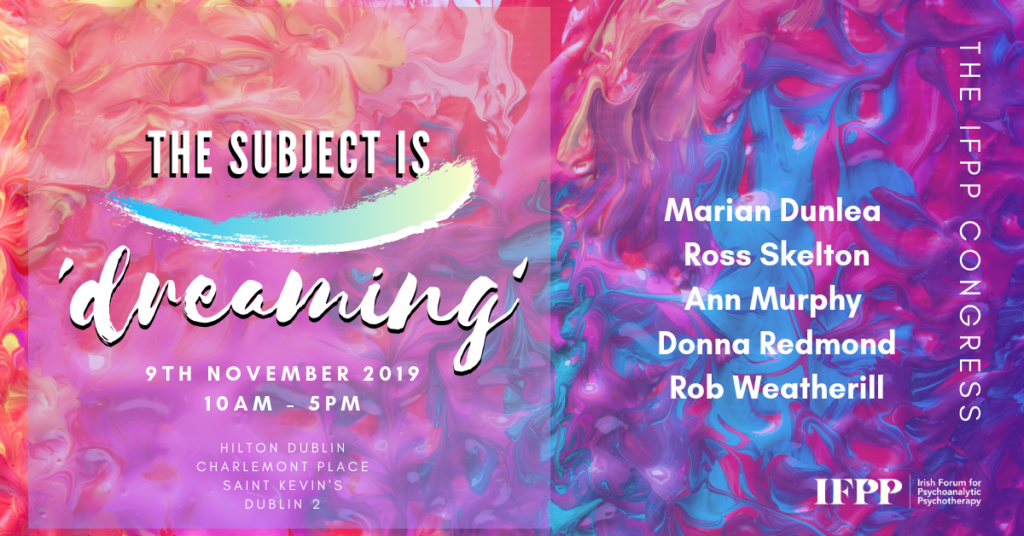 The significance of dreaming can be traced throughout historical, religious and anthropological archives. Records of dream interpretations appear in writings as far back as the ancient Sumarians and Egyptians, in the Hindu, Buddist and Christian tradition
and in aboriginal, Mexican and native American culture.

We may dismiss our dreams, be alarmed by nightmares or consult dream dictionaries to decipher their meanings but we are not unaware of the fact that we dream and are often confounded by them.  Are dreams a portal to another realm, the royal road to the unconscious mind as Sigmund Freud described or simply an artifact of nighttime brain activity, a neural activity filing away and storing the memories of the day?

The seminar will be of interest not only to professionals working in the area of mental health and wellbeing but also to anyone with an interest in the topic.

The Irish Forum of Psychoanalytic Psychotherapy (IFPP) are hosting this seminar to mark their annual congress. 6 CPD points have been awarded for the day by the Irish Council of Psychotherapy (ICP).

Marian Dunlea, M.Sc., IAAP, ICP, is a Jungian analyst who has been leading workshops internationally for the past 20 years integrating body, mind and soul. She is head of the BodySoul Europe training programme, part of the Marion Woodman Foundation. With the development of her unique approach BodyDreaming™, Marian’s work has expanded to incorporate the developments in neuroscience, attachment theory, trauma therapy, with Jungian psychology and the phenomenological standpoint of interconnectedness. Her trainings include Jungian Analytical Psychology, Psychoanalytic Psychotherapy, Psychosynthesis, Infant Observation, BodySoul Rhythms® and Somatic Experiencing. Her book BodyDreaming in the Treatment of Developmental Trauma – an Embodied Therapeutic Approach has recently been published by Routledge.

Professor (emeritus) of Philosophy and Psychoanalysis at Trinity College Dublin, Ross Skelton has specialised in teaching clinical and theoretical psychoanalysis. He was involved in setting up the clinical MSc at St. James’ Hospital and the theoretical MPhil in Trinity College Dublin. He has published numerous inter-disciplinary articles on psychoanalysis and logic as well as studies on the poetry of Louis MacNeice. His 2006 Edinburgh International Encyclopaedia of Psychoanalysis won the Distinguished Academic Publication Choice Award. He is also the author of a memoir, Eden Halt, which is about growing up on the shores of County Antrim. He is currently a practicing psychoanalyst living in Dublin.

Ann Murphy, MSc. is a clinical psychologist and psychoanalytic psychotherapist. She was a founder and Director of the MSc in Psychoanalytic Psychotherapy in the Department of Psychiatry, School of Medicine at Trinity College Dublin, and lectures on psychoanalysis and psychotherapy on post-graduate courses at Trinity College Dublin. She is a training analyst and clinical supervisor, and has a private practice in Dublin.

She has recently presented papers at psychoanalytic and interdisciplinary conferences at The Freud Museum, London, IMMA, The Science Museum, and Trinity College Dublin. She served on the Boards of The Irish Council for Psychotherapy, and the Psychoanalytic Section of the ICP, and as Chair of the Irish Forum for Psychoanalytic Psychotherapy.

Donna Redmond is a registered practitioner with and Chair of the Irish Forum of Psychoanalytic Psychotherapy (IFPP) and a member of the Irish School of Lacanian Psychoanalysis (ISLP). She is a director/practitioner of a psychoanalytic practice in Dublin. She has almost 20 years experience working with adults, children and adolescents working as a psychoanalytic psychotherapist with state funded organisations and in primary and post primary schools as well as in private practice.  She  contributed to the publication, Further Notes on the Child. Owens & Quinn. (Karnac, 2017) and has had articles published in Analyse Freudienne Journal, Paris. 2016 and The Letter, Dublin. 2002.

Rob Weatherill is a practicing and supervisory analyst in Dublin, a member of three psychoanalytic groups. He has a master’s degree in psychotherapy from UCD – St. Vincent’s University Hospital, as well as a European Certificate in Psychotherapy. He taught psychoanalysis on post-graduate courses at St. Vincent’s University Hospital, Trinity College Dublin and the Milltown Institute of Philosophy and Theology. He currently convenes two supervision groups. He has published five books internationally and edited one other. His latest is The Anti-Oedipus Complex. Lacan, Critical Theory and Postmodernism. (Routledge 2017). He has written many papers and articles exploring the interface between psychoanalysis and culture, published both in Ireland and abroad.