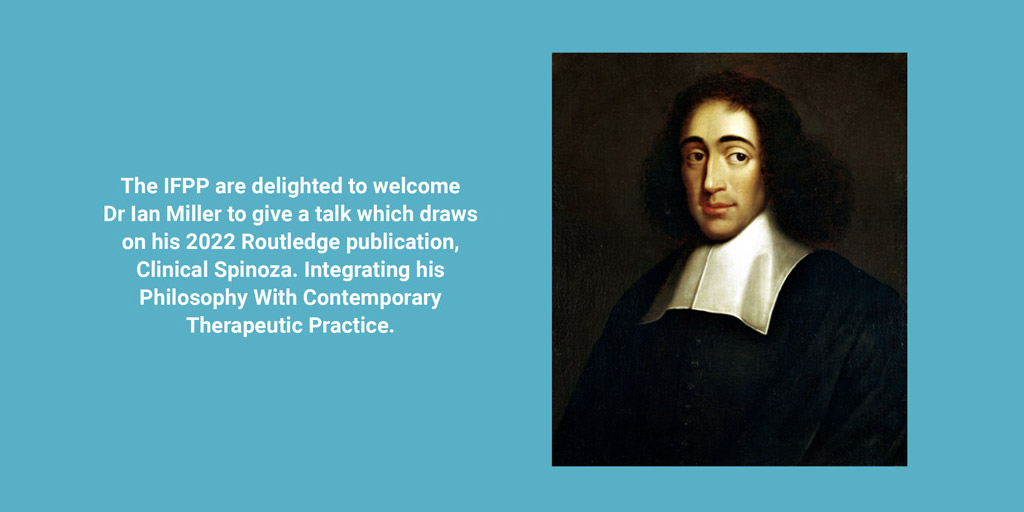 The IFPP are felighted to welcome Dr Ian Miller to give a talk which draws on his 2022 Routledge publication, Clinical Spinoza. Integrating his Philosophy With Contemporary Therapeutic Practice.

Not only was Baruch Spinoza the first modern psychologist, a recognition shared by psychoanalytic thinkers from Lou Andreas-Salome to Erich Fromm, but also Spinoza’s Ethics furnish today’s contemporary clinicians with a threefold cord of aspiration, observation, and methodology, immediately recognizable within the interrelated currents of psychoanalytic thought. Remarkably, fundamental streams of Spinozan thinking are discernable in the “going on being” of DW Winnicott and in the process-rich clinical algorithm developed by WR Bion, in expansion of Klein’s shuttle between paranoid/schizoid and depressive positions.

Clinical Spinoza (Routledge, 2022) is the third instalment in my articulation of today’s psychoanalytic vernacular, derived largely from the clinical contributions of Winnicott & Bion—and developed in the context of my teaching psychoanalytic theory at Trinity College, with the book, Defining Psychoanalysis: Achieving a Vernacular Expression (Karnac, 2016). On the Daily Work of Psychodynamic Psychotherapy (Routledge, 2018), the second instalment, focuses on clinical and social change processes observed and implemented through the lens of Bion’s therapeutic algorithm. However, only in engagement with Spinoza’s 17th century contributions, do late 20th and early 21st century psychoanalytic developments become recognizable as integrally Spinozan concepts.

Returning to the psychological tools advanced by Spinoza— including his monistic critique of Descartes– contemporary therapeutic practice is streamlined and clarified, both directly in the clinic, and in relation to the metapsychology, or philosophical underpinning, of what we do.